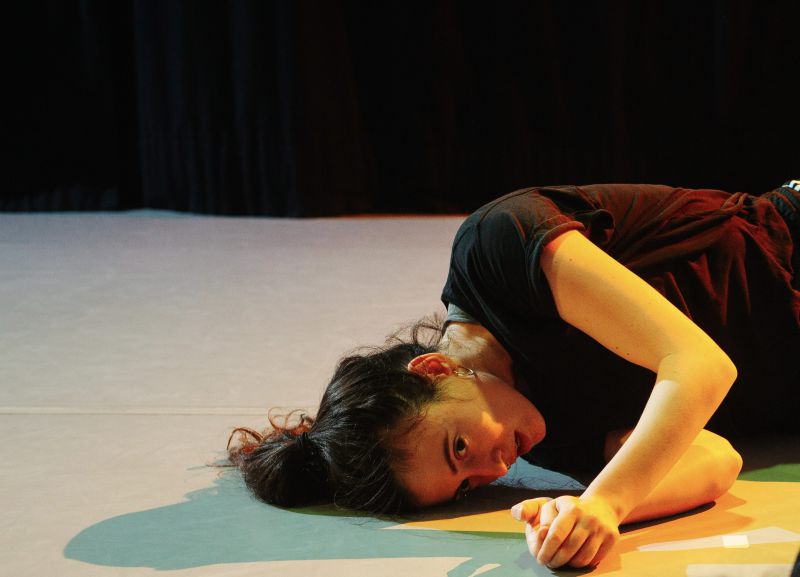 Camilla says, "In my research project "Closing WIP" I want to reflect on the emptiness and boredom of the continuous lockdowns and work with a specific movement quality that I discovered in my body as a result of the long time spent at home. Stiffness, minimalism, and struggle with space will be the key elements of my dance. I want to work on a staccato quality, on body isolations and on very reduced movements. Additionally, I want to have some daily objects around me as a neutral companion in space. My aim is that the emptiness of the movements will in the end not only say something about this moment of global pandemic but of contemporary life at large."

Camilla Fiumara works as a freelance dancer in Frankfurt am Main. Born in Italy, she started classical ballet at an early age and then studied at the Iwanson International School of Contemporary Dance in Munich where she graduated in 2017 with a degree in contemporary dance. She then took part in her first independent production, "Flowers of Life", which premiered in Munich in 2017. After some time in Brussels, where she worked on the performance "Carnaval" together with the Black Spot collective, which was shown in May 2019 at the Kunst Festival and on "Digital Metaphors" with the TerazNow Dance Theatre Collective, she moved to Frankfurt am Main where she collaborated with Verena Billinger & Sebastian Schulz for their work "Zeit / Temps". In addition to a continuous collaboration with Billinger & Schulz in the works "Tanzabend/N.N." (November 2020 – March 2021) and in "Stories/Sketches" (July – September 2021), she was also involved in two productions by the Fredeweß company in Hannover ("Crash Bang" (October-December 2019) and "Parcour" (August-November 2020) and as a guest dancer at the Badisches Staatstheater Karlsruhe (February - March 2020).

ID_Tanzhaus Frankfurt Rhine-Main is an initiative of ID_Frankfurt - Independent Dance and Performance e.V. and supported by DIEHL+RITTER/TANZPAKT RECONNECT, which is funded by the German Federal Government Commissioner for Culture and the Media as part of the NEUSTART KULTUR initiative, dance aid program.