Have coffee, tea and cake together alone with others and enjoy a participative concert-performance. Only on Zoom ;) 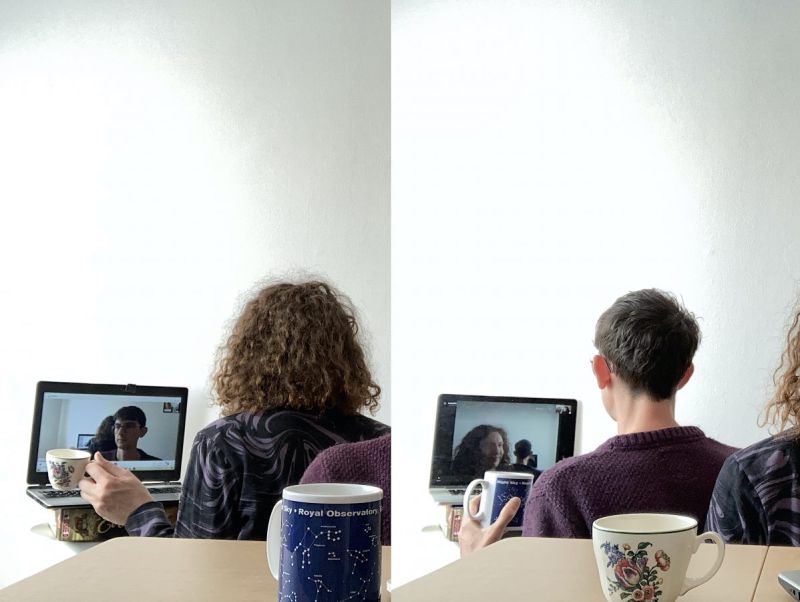 This is a warm invitation to come together online for Afternoon Tea & Kaffee und Kuchen for half an hour on the four Sundays in June at 4pm (3pm UK time). The experimental pop band Tedious Work, invites themselves to join you for coffee and cake in your home. Tedious Work are Paul Norman, Leander Ripchinsky and anyone who joins in. We’ll make participatory music for everyone, even for non-musical people who are scared of participatory theatre and sceptical about spending even more time at the computer. Make yourself a cup of tea or coffee, maybe bring a piece of cake, then enjoy being alone with each other for half an hour. What states of being together can there be? How can we have experiences of connectedness, spatially separated by our digital devices? How do we make a performance about people online, without talking about people online? A session of Afternoon Tea & Kaffee und Kuchen is structured like a concert, designed for different homes. Paul & Leander bring a setlist of songs written especially for this occasion. Song by song, a new invitation is extended and then a different short performative experiment is performed together. For the song Bad Connection, all participants will be asked to take their camera to the place in the house where they have the worst connection. From there, we will try to report about these special places. Those who send an email to tediouswork@liebt-dich.de beforehand may also receive a prepared instrument for a concert. In the song Peeking is allowed, for example, a muted flute orchestra is formed, where players try to find solutions to all play the same note. For I’m sorry we have to start again, prepared mini keyboards are delivered to Frankfurt living-rooms by bike courier. On Sundays at 4 p.m. (3 p.m. UK-time), collective melodies are composed by rolling dice and all six notes are performed together. But, once again, although the online concerts are composed with participation in mind, you can still sit back and enjoy your Afternoon Tea and Kaffee und Kuchen.

Tedious Work imagine themselves as a band in the middle of a world tour. They imagine they are getting tired with playing their debut album “Trennungssongs of Togetherness“ for person after person after person. The inevitable shift is under way. They update their old material, trying to breathe new life into it as they covertly sneak in new songs, but always in such a way that it doesn’t stop the audience from singing along. Tedious Work are on the cusp, a second-year slump, wading in the murk before a new album must inevitably be played, in full, and without an encore.